MacroVar monitors the global economy based on the analysis of financial and economic data of the 40 largest economies and financial markets.

Learn more on MacroVar basic macroeconomic model to analyze each country. Click any country to view a detailed analysis of the country's current economic and financial conditions. Global Manufacturing and Global Services are indexes published by JP Morgan.

Economic growth is measured by Real GDP which is the total income of a country in a year adjusted for inflation.

Inflation (CPI) measures the rate at which average price of products increases in a year.

Economic transactions are completed with either money or debt. The availability of credit is determined by the country's central bank. The degree to which debt is healthy for the economy depends on whether borrowed money is used productively to generate sufficient income to service the debt or not.

An economy is healthy when it generates stable economic growth with low inflation and low unemployment.

Policymakers (government & central bank) use fiscal and monetary policy to inject liquidity during slowdowns (to solve weak economic growth) and withdraw liquidity from an overheating economy (to solve high inflation). 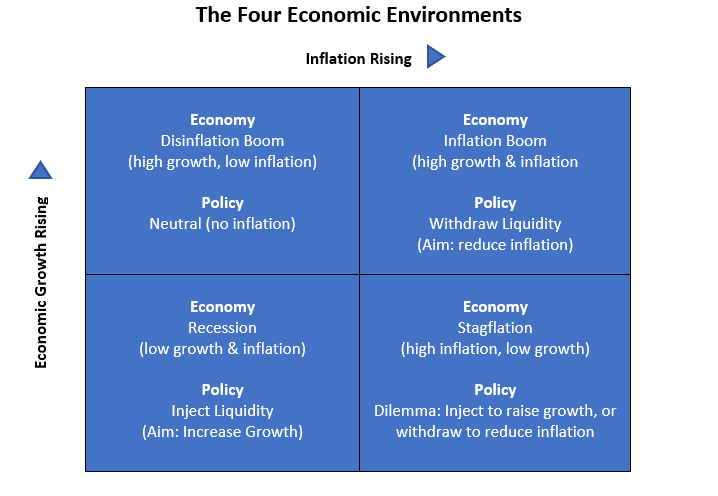 Economic activity is driven by 1. Productivity growth (GDP growth 2% per year due knowledge increase), 2. the Long-term debt cycle (50-75 years), 3. the business cycle (5-8 years). Credit (promise to pay) is driven by the debt cycle. If credit is used to purchase productive resources, it helps economic growth and income. If credit is used for consumption it has no added value.

Money and Credit: Economic transactions are filled with either money or credit (promise to pay). The availability of credit is determined by the country’s central bank. Credit used to purchase productive resources generating sufficient income to service the debt, helps economic growth and income.

Country versus Rest of the World: A country’s finances consist of a simple income statement (revenue–expenses) and a balance sheet (assets–liabilities). Exports are imports are the main revenue and expense for countries. Uncompetitive economies have negative net income (imports higher than exports), which is financed by either savings (FX & Gold reserves) or rising debt (owed to exporters).

Debt: A nation’s debt is categorized as local currency debt and FX debt. Local debt is manageable since a country’s central bank can print money and repay it. FX debt is controlled by foreign central banks hence it is difficult to be repaid. For example. Turkey has US dollar denominated debt. Only the US central bank (the Federal Reserve), can print US dollars hence FX debt is out of Turkey’s control.

A country can control its debt by either: 1. Inflate it away, 2. Restructure, 3. Default. The US aims to keep nominal GDP growth above interest rates (kept low) to gradually reduce its debt.

The government and central bank use fiscal and monetary policies to inject liquidity during slowdowns to boost growth and withdraw liquidity from an overheating economy to control rising inflation. The available policies and tools used during recessions are the following:

Expansionary FP is when government spends more than tax received to boost economic growth. This is financed by issuing new debt financed by 1. domestic or foreign investors or 2. CB money printing

Currency vs Injections & Withdrawals and inflation

The degree of economic intervention depends on the country’s economic fundamentals, its currency status and credibility. Countries with reserve currencies or strong fundamentals are allowed by markets to intervene. However, when nations with weak economic fundamentals intervene heavily, confidence is lost, causing a capital flight out of the country, spiking inflation and interest rates which lead to a severe recession, political and social crisis.

Reserve vs Non-reserve currencies: Reserve currencies are used by countries and corporations to borrow funds, store wealth and for international transactions (buy commodities). They are considered low risk. The US dollar is the world’s largest reserve currency. The main advantage of reserve currency nations is their ability to borrow (issue debt) on their own currency. These countries have increased power to conduct monetary and fiscal policies to boost their economies. However, prolonged expansionary fiscal and monetary policies eventually lead to loss of confidence in these currencies as a store of value and potential inflationary crisis.

Conversely, developing nations are not considered low risk hence their ability to borrow in their own currencies is limited. Their economic growth is dependent on foreign capital inflows denominated in foreign currencies like the US dollar. During periods of global economic growth, capital flows from developed markets into developing nations looking for higher returns. These economies and their corporations’ issue foreign debt to grow. However, during periods of weak global economic growth or financial stress, foreign capital flows (also called capital flight) back to developed countries causing an inability of countries and companies to repay their debt. Central banks gather foreign exchange reserves during growth periods to create a cushion against capital outflows.

A nation’s economy is vulnerable to economic weakness or financial stress when it experiences:

MacroVar Global economic view monitors and presents the following variables for each of the 41 largest economies in the world: